The Friend Who Never Left

Recently, I received two magazines unexpectedly in the mail at my home. The first was Wine Enthusiast. Strange, I thought, since I’m not a fine wine drinker. The other was Esquire. OK, I am a man, so that one makes sense.

I had not subscribed to either but do love the feel of ink on paper as a former “print guy” whose career was in printing and publishing. I quickly realized, I was on a mail list rented by the publisher of these magazines.

Days later, I also received an email from the publisher with some archived articles to entice me to subscribe. Due to a huge decline of advertising revenue the last several years, many publishers are trying regain paid subscriptions just to survive.

My real point is this: Men need their best friends for the tough times.

The email linked to an Esquire article that’s very relevant to the main message of my GodBuddies blog and recent book, Get Out of Your Man Cave: The Crisis of Male Friendship.

The article titled The Friend: Love Is Not a Big Enough Word is a story about one man’s collapse and another man’s refusal to let it happen. Author, Matthew Teague provides a heartfelt story about how his best friend supported him during his wife’s battle with cancer. 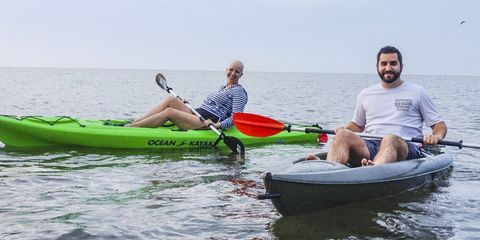 For fourteen months, Dane left his own life to tend to Matt’s household and children while Matt cared for Nicole. He conspired with Nicole’s friends to plan a weekend getaway in a national forest to help strengthen Matt and make him a better caregiver. He tells of Dane’s courage, love, and poise during Nicole’s illness and after her death. Matt alludes to Dane’s quiet descent into a depression afterward and return to his own life. It ends with tears and the expectation of two best friends getting together again soon.

My hope is that everyone has a friend like Dane. He was there to support Matt during some really dark times. He was more than a 2:00 am friend. He is a friend who will never leave.

If you’re interested in finding out more about deeper, more authentic friendships, you can purchase a copy of my book at the links below.  After you read it, please post a review on Amazon, which goes a long way to raising the visibility and ranking.

Buy the eBook
Buy the Paperback

Feel free to also share this post with someone who needs to hear this message as well. Thanks!

Do you want authentic friendships?

This week’s weekend wisdom comes from Wire for Men, a twice-weekly devotional to help men to connect with God, to choose God, right in the middle of their busyness. As you will read, Justin Camp, who Read more…

Men, Do You Submit to Your Wife?

Submission is a word that’s not very popular these days as the classic bumper sticker states: “Question Authority.”. Submission is also unpopular, especially when Bible verses like Ephesians 5:22: “Wives submit to your husbands as unto Read more…

Don’t be a Poser!